Toronto, November 28, 2016 For immediate release  Canadian Friends of AKIM announced today that it will be contracting with AKIM Israel to provide support to the persons with intellectual disabilities and their families who have been affected by the devastating fires in and around Haifa. About 20 families supported by AKIM were among the 1800 evacuated in Haifa and one AKIM day centre was evacuated. 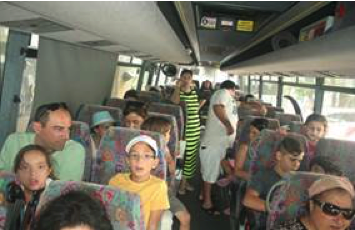 Remarkable actions by Israeli firefighters with support from several other jurisdictions in the region – including Turkey, Jordan, Egypt and the Palestine Authority — limited the damage and resulted in no loss of life.   The international support has led to a move by Israel to create an international fire unit in the region, and led some to see the cooperation as breathing new life into the hope for peace.

Although AKIM suffered no loss of buildings, the trauma of the fire has had a big impact on the people it supports. Daniel Bar-Am, International Director of AKIM Israel reported that “in times of crisis, people with intellectual disabilities suffer most. For individuals who have an intellectual disability it was disturbing to see the night sky lit by the blazing fires, and to be evacuated with little notice.”

In order to help ease the shock, Canadian Friends of AKIM is providing a recreation program for 250 children and adults in the region affected by the fire in order to mitigate the stress. The Israeli government will contribute to the Canadian project.

AKIM Israel is the largest provider of supports and services to persons with an intellectual disability in Israel with branches in 64 communities. Canadian Friends of AKIM has been collaborating with AKIM for over 50 years.

Connect with us online via our social media platforms: